Don't fly Austrian Airlines, if you're a vegetarian 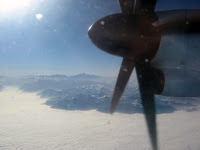 Two weeks ago, I went on a 5-day trip to Vienna. I had booked a flight on Austrian Airlines, through Swiss. I'm a vegetarian, so I was quite anxious, because I was not asked if any special meal was required when I bought my tickets. I was delighted to see that the meal served during the flight was vegetarian for all passengers. It consisted of spinach and ricotta ravioli with cherry tomatoes and a cream sauce of some sort. Not that bad.


Four days later, on the flight back to Geneva, though, the meal contained ham (why in hell do people need ham or bacon in what would otherwise be perfectly fine vegetarian dishes?). I told one of the flight attendants that I was vegetarian, but she couldn't do anything about it and didn't particularly seem to care. It wasn't such a big deal, but I was really hungry. I ate the small piece of bread they gave me, as well as my dessert. When I arrived in Geneva, I was hungry again. It was 10:15 PM. I had to buy something to fill my stomach before I went to bed.

A few days later, I wrote an e-mail to Austrian Airlines. I guess I cannot reproduce their reply here, since it comes with the usual "confidential" notice. Anyway, to sum it up, they can't offer vegetarian meals, because then they would have to offer "a lot of other special meals". If it's not a bad excuse, I don't know what it is. We're in 2008. It shouldn't be too difficult to have special meals served even during short flights. After all, airlines don't make them themselves. And if I can't have a vegetarian meal, at least I shouldn't have to pay for other people's meals.

So, what airlines would you recommend or advise against for vegetarians? What are your best or worst experiences, when it comes to in-flight vegetarian meals (or lack thereof)?