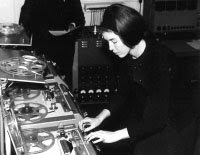 I admit it: I like bootlegs. They're a way for me to stay interested in musicians that don't release music as often as they promised (Prince) or that don't release any music anymore (Miles Davis). From time to time, they also contain a few surprises.

Last week, I was listening to a 2-CD bootleg called Wow!, released in April 2008 by "Eye" Records. Nothing too special, but, at the end of the second CD, a track particularly caught my attention. It was an instrumental recording, not by Prince, but by someone called Delia Derbyshire, which I had never heard of before. I quickly learned (thanks to Wikipedia) that she was a British musician, a "pioneer of electric music", whose best-known work is the theme music to Doctor Who, first recorded in 1963.

What struck me was that the track I was listening to, "Clouds", by Delia Derbyshire, was something I had heard many times (maybe even hundreds of times) before. It was the beginning of my favorite Prince album of all time, Lovesexy, released twenty years ago, in 1988, without the synthesizers, sound effects, and Ingrid Chavez' "poem". Listen to the MP3 excerpts. You should notice the similarity...

Apparently, "Clouds" was part of a project called The Dreams, recorded in 1964 (according to Wikipedia) and it circulates on a 131-track compilation entitled Complete Works Compiled, possibly a bootleg (according to a thread on housequake.com).

Conclusion: the first seconds of "I No", the opening song on Lovesexy, are not Prince on synthesizers, as I had always assumed, but the (uncredited) work of Delia Derbyshire, who didn't use any synthesizers, by the way!

The questions that remain are: how did Prince get ahold of this (officially unreleased?) recording and did he use it with permission?

(One last detail, for the non-Prince fans: Jamie Starr is one of the many pseudonyms Prince used in his career. He's cited by Prince himself in "D.M.S.R.".)

Update (May 14, 2008). After listening to The Dreams (1964), it appears quite clearly that "Clouds" is not part of that recording. According to a thread on prince.org, "Clouds" probably comes from one of the sound effects collections released by the BBC Radiophonic Workshop. My guess: it might come from Out of This World, but listed under a different name. If you know the exact release on which "Clouds" appears, please let me know!

Update (May 24, 2008). I just had a listen to the Essential Science Fiction Sound Effects, Volume 2 CD. Track 61, "Passing Clouds", credited to Roger Limb, not Delia Derbyshire, is the track Prince used on "I No". This CD is the 1991 reissue of the 1976 LP Out Of This World. The conclusion is that Prince just used this track from Out Of This World. Since this is a compilation of sound effects, he didn't have to ask for permission or to credit anybody. End of the story. Or, almost. The only question that remains is: why did "Eye" Records wrongly credit "Passing Clouds" to Delia Derbyshire? The likely answer is: because they're bootleggers and they make that kind of mistake very often... Anyway, I've updated the articles on Wikipedia.

Update (September 3, 2017). I've noticed this weekend that Prince used "Sea Of Mercury" by Dick Mills on Ingrid Chavez' "Heaven Must Be Near" (on the 1987 version, as well as on the released version) and "Dance Of Fire-Flies" by Malcolm Clarke on Ingrid Chavez' "Crystal City Cry". "Passing Clouds" by Roger Limb was also used on "Sad Puppet Dance". All those "effects" tracks come from the same BBC compilation. There's also a track called "Crystal City", by Glynis Jones, on the BBC compilation. I cannot help but think that it inspired the title "Crystal City Cry"... I've sent this information to Prince Vault. They now have updated their articles.