Choosing a definition of free will 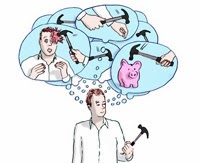 This is an answer to Alessandro Vernet's post "Defining free will". I was going to comment directly on his blog, but my reply turned out longer than expected and I've always wanted to write about free will anyway (which reminds me that I have a very long draft of a post in French that I started a long time ago and that I need to finish...).

"Lastly, Eddy Nahmias assures us that this definition is inline with the way people, both philosophers and non-philosophers, think of free will [3]."

Judging by our previous discussions on this topic, it appears quite clearly that the above is the crux of our disagreement.

I have a very hard time believing Nahmias when he says that his definition of free will (let's call it the compatibilist free will) is what is generally accepted by non-philosophers. It is not my experience and it just doesn't make any sense. At least 80% of the people worldwide believe in a personal god and probably as much as many people believe in the existence of an immaterial soul/spirit (I haven't found any study about this particular point, unfortunately). So it seems perfectly natural and intuitive that most people would believe in a libertarian free will, not in a compatibilist free will. Admittedly, I need to read Nahmias' papers and how he came to that conclusion. I will gladly change my point of view if what he wrote actually makes any sense.

I would add that most people probably don't even know what determinism is (from a scientific point of view) and have probably never thought about what it means to live in a deterministic universe if you reject the idea of a soul (I mean, how many people really ponder these existential questions...?).

Now, the fact that most philosophers accept the idea of a compatibilist free will is actually confirmed by at least one survey, so I have no problem with that idea.

Using a definition of "free will" that is inline with most people's definition is very important. Doing otherwise is just leading to more confusion. It is like replacing "physics" or "the laws of the universe" in a scientific talk or paper by "god" (that would be a pantheistic god) and concluding, thus, that god exists. It just leads to more confusion, because that is simply not what most people have in mind when they talk about god.

Another important thing is that the concept of compatibilist free will, as I understand it, doesn't say anything particularly exciting or original. Ok, we have a brain, we have a neocortex, we're conscious, we can use our imagination to project ourselves into hypothetical situations, we can make informed choices or very bad choices, we can learn from our mistakes (or not), some substances (alcool or drugs) might alter your abilities to project yourself into the future, etc. Ok. I get it. We have a specific vocabulary for all these concepts. We don't need to use a historically charged term to discuss these matters.

The libertarian free will, on the other hand, is what I "feel in my guts" ("I can choose whatever I want. I'm free to choose. Even if in prison, nobody, nothing can prevent me from thinking what I want."). The day I realized that everything I ever did or thought in my life only depended on the "initial conditions" (whatever they are: birth, Big Bang, etc.) and the "laws of the universe", and that the feeling that I was really free to think anything was just an illusion, was a real shock. Fifteen years later, I still cannot accept intuitively that "I" and "the atoms in my brain" are the same thing. But I rationally know that it is the case. This is the hard problem of consciousness.

And that realization changed the way I view the world. It helped me see the injustices and the inequalities in our societies, how and why people do what they do, the fact that most of what they do, think, learn, etc. in their lives have probably more to do with "pure chance" (i.e. things we don't know, unconscious processes, etc.) than anything else.