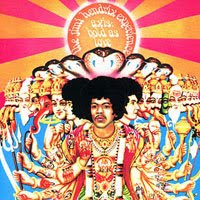 This is old news, but, a few days ago, I was listening to Jimi Hendrix's Axis: Bold as Love album for the first time in my life (yes, I know: shame on me) and it struck me: I had already heard the drum introduction to "Little Miss Lover" somewhere. Once again and as it was the case with Roger Limb's "Passing Cloud" track, I heard it in a Prince song, "Tick, Tick, Bang", from the Graffiti Bridge album, released in 1990. You can clearly hear Mitch Mitchell's drums throughout Prince's song. As you can expect from Prince, the sample is not credited.

Note that you can hear the sample more prominently in the 1989 unreleased version of "Tick, Tick, Bang", as most of the extra instrumentation is missing. As for the 1981 unreleased version, it uses live drums instead of a sample.

Any other interesting samples I've missed?